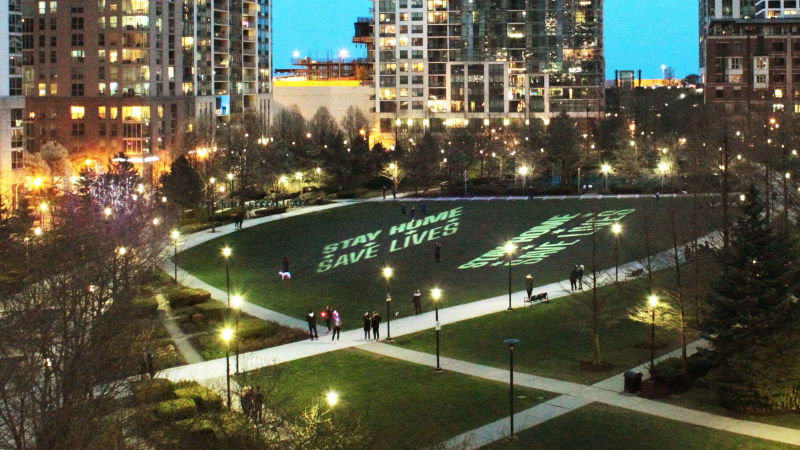 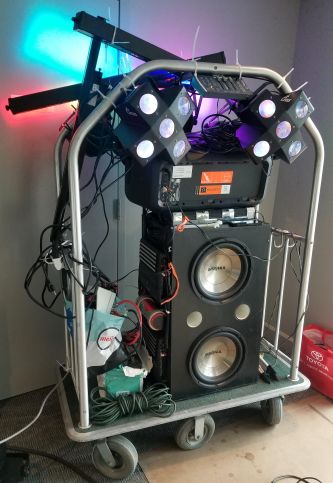 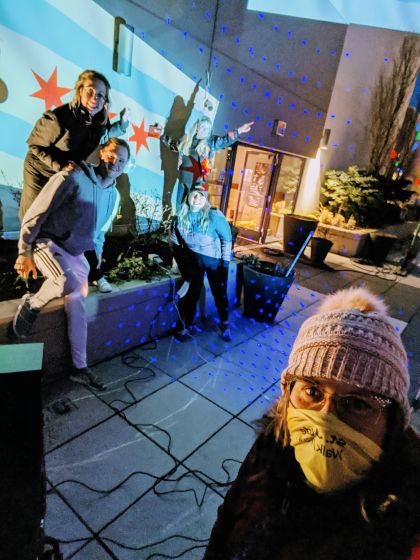 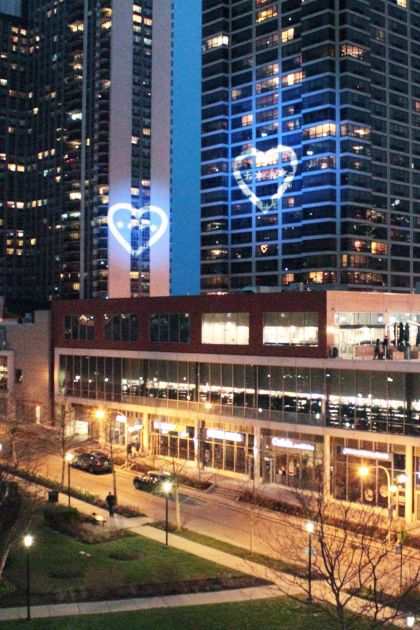 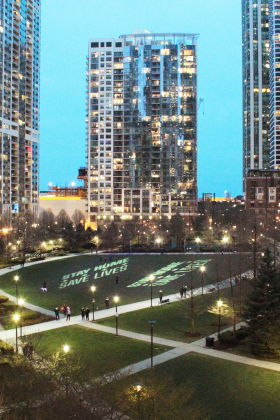 At 8 p.m. on April 24, New Eastside residents helped Chicago score a victory against coronavirus by joining a celebration to honor the workers fighting against it. They clapped and hooted from their balconies while lights and music filled Lakeshore East Park with hearts, messages and an amplified broadcast of “Sweet Home Chicago.”

The excitement came during a recent installment of a nightly singalong that will continue into May and remain in place for the duration of the crisis. Besides paying tribute to heroes on the front lines, the shout-out provided a ceremonial release from the citywide stay-at-home order that many Chicagoans will never forget.

The recurring display of solidarity is a tradition that started on March 21, when a Rogers Park couple convinced thousands of Windy City residents to open their windows and sing along to Bon Jovi’s “Livin’ on a Prayer.”

From there, the inspiration traveled to the South Loop, where web designer Laarni Livings and a team of like minded influencers created Chicago Unite At Night, a Facebook group, dedicated to the singalongs, that has attracted nearly 7,000 members in little over a month.

At first, they shared Spotify playlists to make sure everyone was on the same song. Then the local media got involved. Now, FM 89.5 Vocalo supplies the music every Monday through Wednesday, and 97.1 The Drive plays the Friday night soundtrack.

Arranging the set lists is a process that brings the community together.

“We poll every day for songs,” Livings said. “People can go to our Facebook group and vote for the song they want to hear.”

The South Loop high-rise dwellers also added their own light shows to the mix, communicating with one another through strobes and colors emanating from the balconies of their apartments and condos.

Beginning May 1, the start time of the nightly events will be 8:30 p.m. to accommodate for the summer sun. For more information, click here.

In a nod to Mayor Lori Lightfoot’s “Stay Home, Chicago” campaign, the April 24 selections opened with the National Anthem and followed with the Blues Brothers cover of “Sweet Home, Chicago.” Next came REO Speedwagon’s “Keep on Rolling,” Joe Cocker’s “A Little Help from My Friends” and Ben E. King’s “Stand By Me.” Applause from residents and dogs could be heard throughout the neighborhood.

The energy in the New Eastside has grown since Perry first became involved.

“I started doing this one night on my own,” she said. “I put my speaker out on my patio and I was out there with my little tambourine and I think there were people from Regatta doing the same thing in their building.”

Following the advice of Lancaster door person Bernard Green, Perry began to dial-up the emerging tradition with help from a few enthusiastic and resourceful neighbors.

Among them was Ginger Menne, a real estate broker for Baird & Warner who remembered that “the building used to host parties on the rooftop sundeck.”

“I pulled out all these light displays and big machines, and we started setting that up on the rooftop, and I asked the doorman if there’s anybody in the building who could help me,” she recalled. “He said, ‘you need to talk to High-Tech Dan.’”

“Hi-Tech Dan” is a defense and aerospace engineer named Dan Miller who also lived in the Lancaster. Miller owns a speaker system that he built from the resuscitated components of an old car stereo that was nearly destroyed by a 2013 flood in Lisle, IL. He agreed to load the 150-pound rig onto a luggage cart, along with some heavy duty batteries and even more lights, and haul it up to the roof.

The speakers allowed sales and marketing professional Güliz Sönmez, another resident, to emcee the events using a microphone from an old karaoke machine. Besides offering an introduction and recap of the proceedings, Sönmez also started baking chocolate chip cookies for the crews at Engine Company 13, who began parading their trucks around the park after learning about the tributes from Menne.

“They keep coming out for us, so we have to do something for them,” she explained. “Whether it’s COVID or not, they’re showing up every time someone calls 911.”

The group hauled their equipment up to the rooftop every night at 7:30 p.m. while another neighbor, financial planner Janine Millensifer, captured the action on a Go-pro from locations throughout the park. They began jokingly calling themselves the “Lancaster Core5” as the singalong’s popularity grew.

“The vibe in the park has gotten a lot more energetic,” observed Millensifer. “It makes you feel like you’re not alone.”

The Core5 worked with Laarni Livings and city officials to replace their homegrown show with the professional gear and expertise of two Chicago outfits for the April 24 singalong.

Creative Live Control, a company that designs events and concerts for artists around the world, installed a pair of Robe MegaPointe projectors near the Aqua building and lit up the neighborhood with Chicago stars, hearts, and the messages “Stay Home Save Lives,” and, “Chicago Health care workers.”

“It was exciting,” recalled owner Charles Thomas. “The buildings are really close in the Lakeshore East community, so you can really feel the energy.”

Only The Beat, a firm that supplies audio for clubs and warehouse parties, ran the music through a festival-grade sound system with six 18-inch subwoofers and a line array of RCF loudspeakers on the Lancaster rooftop.

While cheering for the doctors, nurses, cashiers, delivery drivers, police officers and other heroes on the front lines of the health crisis, the community transformed its rage and fear into collective triumph. For a few joyful minutes, they let it be known that the invisible reaper made a huge mistake by showing up in a town that celebrates the blues like no other place on earth