Skip to main content
You have permission to edit this article.
Edit
Home
News
Out & About
Business
Features
People
Opinion
Subscribe
Press
1 of 2 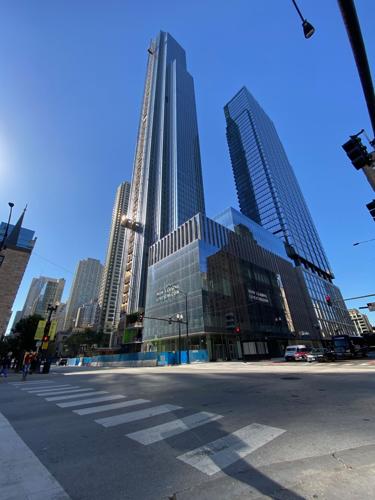 Construction on One Chicago, a new multi-use development in River North, is expected to finish in 2022. Photos by Elaine Hyde 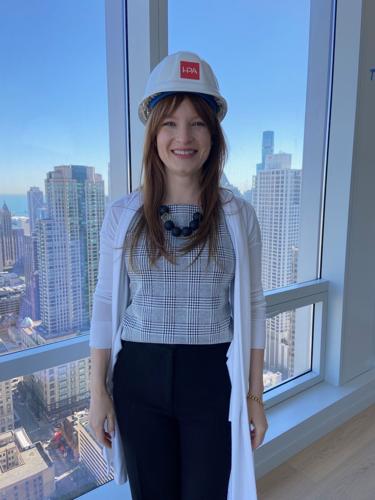 Sophie Bidek, a partner at Hartshorne Plunkard Architecture, at One Chicago.

Construction on One Chicago, a new multi-use development in River North, is expected to finish in 2022. Photos by Elaine Hyde

Sophie Bidek, a partner at Hartshorne Plunkard Architecture, at One Chicago.

2021 has been a year of tremendous change for the landscape of downtown Chicago, with new development projects welcoming residents for the first time and new parks reshaping the face of the city.

In River North, the One Chicago skyscraper is nearing completion, with construction expected to wrap up in 2022. Two Chicago-based firms, Hartshorne Plunkard Architecture and Goettsch Partners, collaborated on the project, which is located just across the street from Holy Name Cathedral and built upon a block that formerly contained a parking lot for the cathedral.

When finished, this mixed-use building, consisting of two towers and a 10-story podium, will include more than 800 residential units, along with a Whole Foods, Life Time Athletic Resort and Spa, restaurant, event venue and office space. There will also be a landscaped park located along the east side of the building.

“The idea, the dream, the vision, is that you can get married at Holy Name, walk across and have your reception at the event space,” said Sophie Bidek, a partner at Hartshorne Plunkard.

One Chicago is home to four different unit types, each with its own signature style. The west tower at 23 W. Chicago Ave. contains 391 apartments, while the east tower at 14 W. Superior St. is divided into 276 apartments and 77 condominiums. The podium houses an additional 68 lofts.

According to Bidek, the starting price for the condos ranges from approximately $1.68 million to $28 million.

Bidek said the initial pre-leasing period was “very successful,” with more than 100 residents moving in during the first few opening weeks. Condo sales are well ahead of schedule, she added.

“There has been tremendous interest in One Chicago and this neighborhood that we are only seeing grow as completion draws near,” she said.

One Chicago tenants can enjoy amenities such as membership at Life Time Athletic Resort and Spa, a putting green, rooftop lounge and grocery delivery from Whole Foods and more. To accommodate residents’ canine companions, the building also offers a number of dog-friendly features, including a dog run, dog washes and grooming and boarding services.

While some of One Chicago’s 1,100 off-street parking spaces are below ground, the building’s podium conceals additional parking spots from the street view.

“What we wanted to do was cover all of the parking,” Bidek explained. “We put it underground, but the parking that’s above grade, we have it tucked in the middle, like a doughnut. The whole of the doughnut is parking and then everything around it is active leases.”

For Bidek, who describes mixed-use projects as her specialty, bringing One Chicago to life has been an exciting opportunity.

“The piece I love about architecture the most is the puzzle-solving,” she said. “So, a mixed-use project where you’ve got all these different end users and all these different stakeholders that want to be in the building ... solving that puzzle, to do it successfully and see people in it working, is really what I’m most proud of.”

As of mid-October, around 50% of the building’s units had been sold, said Shannon Gibson-Giampa, a Tribune Tower Residences sales consultant.

“It’s so special, and the location that we have here is incredible,” Gibson-Giampa said. “You’re right in the heart of everything, and with a restaurant and retail at the base, and everything that we have within the building you never have to leave, really.”

According to Gibson-Giampa, the building’s amenities offer “a little something for everybody,” including a fitness facility divided into a cardio side and a strength training side, space for socializing and working, a golf simulator, putting green and a park in the center of the building.

“This has been huge, being a part of it from the whole beginning and watching it come to life like that,” Gibson-Giampa said. “Very exciting.”

Created through a partnership between Lendlease and Magellan Development Group, the new park was developed along with the nearby Cascade and Cirrus towers. Claude Cormier + Associés handled the design, with contributions from architectural firm Confluence.

“If you can create areas that are exciting to people, that people will want to go to, that’s where you win, and you make this a winwin,” said Ted Weldon, executive general manager of development for Lendlease’s Chicago office. “And to us, looking at this development, the open space and how we’ve actually created this wonderful connection to the lakefront is what I’m most proud of.”