You have permission to edit this article.
Edit
Home
News
Out & About
Business
Features
Real Estate
People
Opinion
Multimedia
Subscribe
Share This
1 of 2 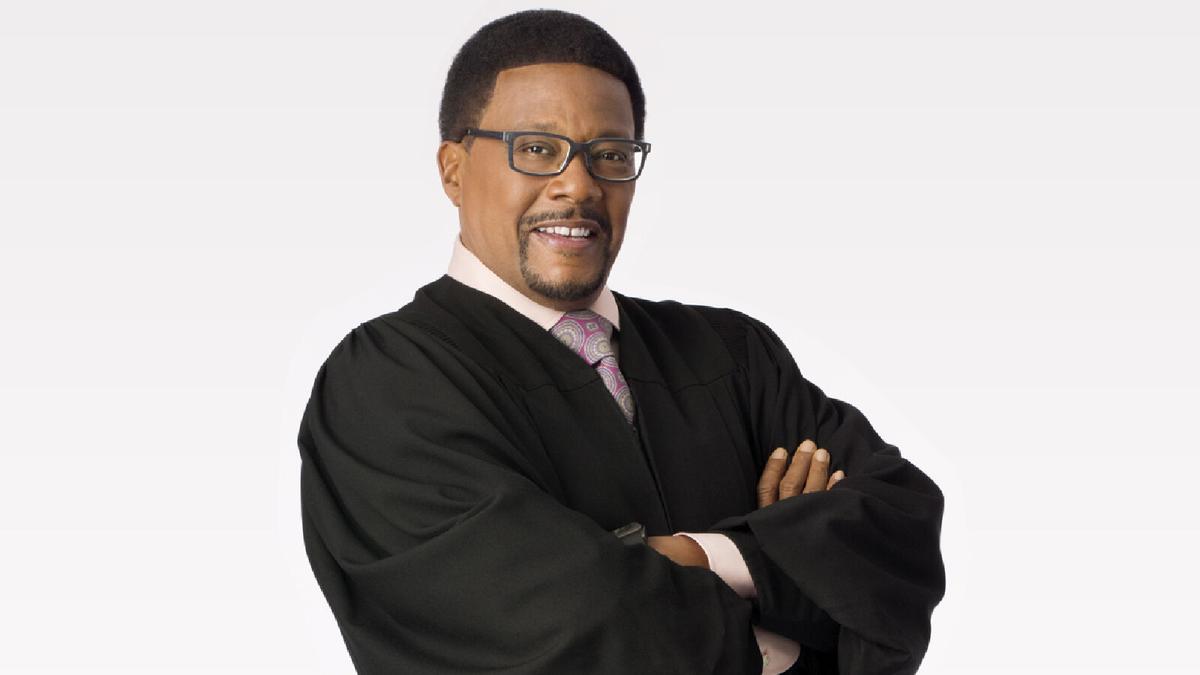 Judge Mathis shares the wisdom he learned on the streets of Detroit with the people who seek justice in his NBC Tower courtroom every week.

Judge Greg Mathis was the youngest elected district court judge in the state of Michigan.

The honorable celebrity talks about his journey

from the streets of Detroit to the NBC Tower

and back again... and again and again

Judge Greg Mathis earned a top-five rating as a justice for Michigan’s 36th District before he became Judge Mathis, host of the Emmy Award-winning court TV show, in 1999. The honorable celebrity has traveled far from Herman Gardens, the public housing projects where he grew up. But in a lot of ways, he never left.

“The Gardens” was considered one of the most dangerous areas in Detroit before it was gradually demolished and replaced by Gardenview Estates, a community of low-to-moderate-income single family homes and apartments, beginning in 1996.

Mathis was a key contributor to the rehabilitation effort. He founded a youth agency in the basement of a neighborhood church before demolition began. He built the nearby Mathis Community Center, a place where “learning is encouraged and positive activities are a way of life.”

“The housing that we built some 15 years ago is thriving,” he said. “I give a reunion every summer for all the past and current residents of the Herman Gardens.”

It is also the neighborhood where Mathis acquired the gun that would land him in Wayne County Jail for a concealed-weapons charge when he was 17 years old. While behind bars, his mother told him that she was suffering from cancer. A few months later, the sickness ended her life and changed his forever.

Alice Lee Mathis worked two jobs to send the future judge and his three older brothers to Peterson Warren Academy, a 7th Day Adventist school. Cleaning bedpans at night and houses by day, she taught them how to achieve.

Her fourth son went on to graduate from Eastern Michigan University, earn a law degree at the University of Detroit Mercy, and become the youngest elected district court judge in Michigan. In May, he will be honored with a star on The Hollywood Walk of Fame.

“Most of my success in life I’ve attributed to my mother,” Mathis said.

Now, he shares the wisdom he learned at Herman Gardens with the people who seek justice in his NBC Tower courtroom.

What do you love most about your mother?

The priority she placed on education and spirituality and hard work. We really didn’t have to stay in the housing projects if she did not invest in my education. She paid $80 a month for our rent and $120 a month for school. That would have been enough to have us in a pretty decent neighborhood in the ’70s. My brothers and I rebelled and got in trouble for a while. But when we decided to turn our lives around, we had the tools to do so. If a guy comes from prison with a fourth, fifth, sixth grade reading level, totally failed by society in every way, it’s hard to recover. But if you have that basic quality education and a sense of right and wrong, morality and values, you can revert.

How do your teenage experiences make you a good judge?

Having seen and participated in most facets of the street life, I have a unique knowledge and insight as to how that life works. For the most part, we’re referring to self-destructive tendencies and lifestyles. Folks that come before me who are involved in drugs, or have a dispute involving criminal activity, someone coming to me trying to con me, I have the unique ability to know when I’ve been played.

How has the old neighborhood changed?

Starting with the youth agencies, I began trying to change the circumstances in the community I grew up in. The agency I founded later became a community center for ex-offenders and those afflicted with drug addiction. Then the projects became dilapidated. I coalesced with those who survived and we lobbied the government and we rebuilt the projects.

How did you persevere during the time you were denied a law license?

After passing the bar, they denied my license for the conviction I had, which had already been expunged. During that time, I focused myself in other ways to keep fighting and go where opportunity existed: politics. After I did get my license (via Michigan Supreme Court ruling), I practiced a few years and then was able to go back to the other career I had cultivated and call on my sources to support me in running for judge. Last week in Detroit, I’m sitting among three powerbrokers. They wanted my influence to support the current deputy mayor who is considering a run for mayor (Conrad Mallett, Jr.). He was the primary advocate for me when he sat on the Supreme Court. If he runs and wants my support, I’ll give it to him.

How did you gain a foothold in Detroit politics?

Through grinding it out and showing that I could be of value as a hard worker. I had a degree in political science, which doesn’t create a whole lot of opportunity. I was getting concerned knowing that. I got hired for an unpaid internship with (city council member) Clyde Cleveland my senior year. I commuted twice a week on the Greyhound from Eastern Michigan, an hour each way, on my own dime, working all day and hustling and showing my worth. It was that type of tenacity that had me noticed. I struck up friendships with everybody. Clyde Cleveland’s chief of staff Annette Rainwater asked if I would take a job.

How did you evolve as a judge while you were on the bench in Michigan?

My first day, I thought I might have been nervous, but I’ve always had strong confidence, bordering on arrogant. They don’t give you a seminar about what to do. You’re a lawyer, you know the filings, and so you should know. I hadn’t practiced every facet, but that did not bother me. Nothing intimidates me. It comes from my mother. As early as I can remember, she would refer to me as bad, but real smart. Her friends would notice something that might have been a little advanced and say, “that boy sure is smart, but he’s bad as hell.”

When did you start wearing those round-rim glasses?

I began wearing my rim glasses when I began interning. They’ve changed in various forms, but I’ve had round-rim glasses ever since coming out of college to prove that I was a professional and let people know that I was a little professorial.

How did the Judge Mathis show come about?

When I was running for office, the media came after me for my criminal background. They had found out through one of the members of the state bar commission. It was expunged, but they asked me about past convictions on my application for the bar—I said “no.” Then it said what about expunged convictions? And I said “yes.” It kind of defeated the purpose of expungement, and that’s how I won my right to practice. When I won, it was like a one- or two-day national success story—I was the youngest judge in Michigan history, elected by virtue of a denial by Main Street society—and I started getting calls from producers, agents and Hollywood types.

How can the U.S. Justice System improve its treatment of African Americans?

We need to vote for prosecutors and judges and police chiefs who are fair. We have to reform the criminal justice system’s bias towards Black and poor. We have to reduce bail for nonviolent offenders or eliminate it altogether, which also saves money for taxpayers.

The overwhelming majority of police do good things, but there is a minority that is either subconsciously or consciously biased against Black men. It comes from portrayals of Black men in the media: violent, dangerous predators who engage in criminal activity. The police have that stereotype, and then they create the stereotype that the community has about the police. That creates fear. But if the community likes the way you treat them, it’s a friendlier environment. Police should live somewhere near the community that they patrol. When I worked for the mayor of Detroit, we made standalone stations separate from the precincts where the community got to know the officers. People could come in to talk about the community and get city services.

If you do your job perfectly, what do viewers get out of it?

The audience gets entertainment at the litigant’s expense, and the litigants—when I have a little fun with them—they take it in jest. They’re going to walk away feeling entertained and informed. But I always leave a social commentary in cases.

How would the presidential debates be different in your courtroom?

Oh my goodness, President (Donald) Trump and I would have a ball clowning with each other. Unfortunately he’d be threatened with contempt and jailed. Or, if I don’t have the power to jail him, I’d have the power to have the microphone shut off. Or, it would be the same sentence that Kenan Thompson handed down when he played me on the sketch on Saturday Night Live: I would order him to pay $10K and say something nice about Nancy Pelosi.

What steps do you take to make sure people are presented with dignity?

Many of the people that come before me are living at, or near, the poverty level. In impoverished neighborhoods, you have all the pathologies of crime and drugs and poor education and people impacted by those circumstances. That causes them to be self-destructive in their lifestyles and less cultivated in the ways of society. I sometimes come down a little hard on people from that environment because that’s where their point of view comes from, and they are a lot more boisterous. I’m not going to encourage them like Maury or Springer. I try to infuse dignity and respect and sometimes that is a combination of tough love, emphasis on love.

What is the hardest lesson to teach young people at Mathis Community Center?

Young people don’t fail. We fail them. It is the result of a failed education system. Young people have to be educationally motivated, but they aren’t responsible for their own education until high school. There is a lack of responsibility and motivation that we see from the clientele that we serve, and we serve impoverished families in the impoverished city in Detroit. Another thing I see lacking is structure and responsibility in the households. My mother worked two jobs. We saw her from about 3:30 to 4 p.m. We did homework. We did bible reading. We’d eat. Then she’d take a nap until 10 p.m. and go to work the midnight shift. Return at 8 a.m. to get us up for school. That was an organized structure.

What part of your career gives you the most pride?

Being elected judge. Second proudest moment is to be honored with a star on the Hollywood Walk of Fame.