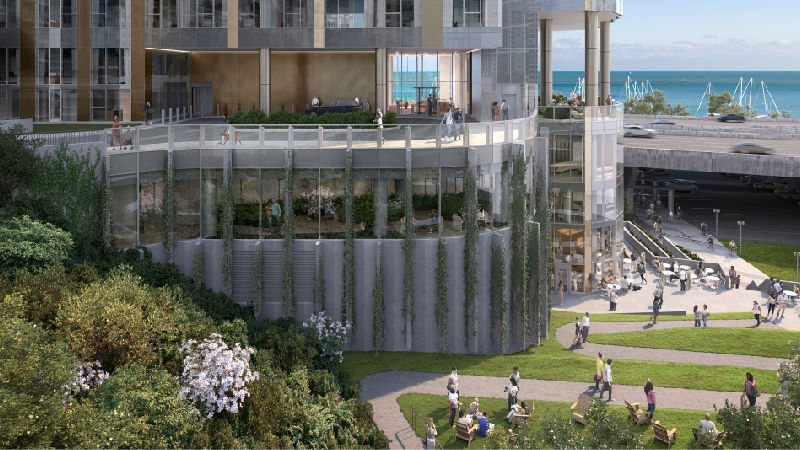 The barrier of Lake Shore Drive "disappears" at Cascade Park 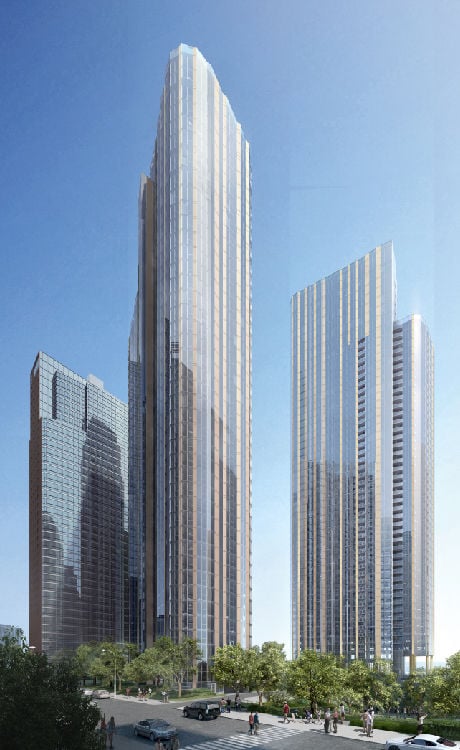 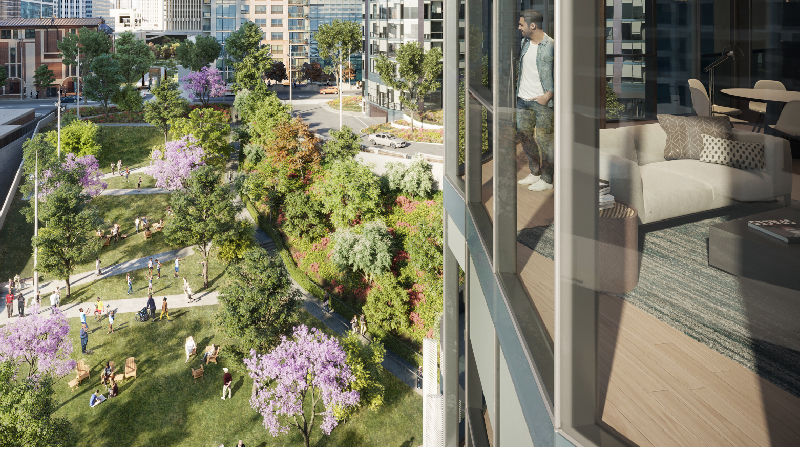 Activity on Chicago’s Cirrus and Cascade towers hasn’t slowed during the pandemic, bringing the neighborhood closer to a new park-like space and connecting it with the lake.

Standing near the intersection of Harbor and Waterside drives, the properties will serve a much greater population than the residents moving into its 866 units. The park will accommodate thousands of neighbors and visitors strolling between Lakeshore East Park and Lake Michigan.

“Public space in connection to the lakefront for this part of the city is just as important as the architecture,” said Thomas Kerwin, founding principal of bKL Architecture, the firm that designed the buildings. “The location is one of the most strategic key sites in Chicago.”

Although Kerwin is quick to explain how the bronze color palette he created for Cirrus and Cascade will enhance the “preponderance of green and blue glass towers” dominating Chicago’s skyline, he is just as enthusiastic to describe the innovations happening on the ground.

“We created this valley park with landscape architect Claude Cormier,” he said. “Rather than having it elevated and detached, it’s sloped and connected. The barrier of Lake Shore Drive disappears because you can graciously walk underneath it.”

According to Lendlease Executive General Manager Ted Weldon, who is heading up construction and development, the park reflects a community-minded solution. Driven by research showing up to 2,000 people pass through the area on certain days of the warmer months, it represents an evolution that has occurred since the concept was developed in 2015.

“The original master plan called for four buildings with the park in the center,” he said. “It didn’t quite do the site justice because the space wasn’t shared by everyone and did not create great views for our neighbors.”

The revision included repositioning the park and designing a trio of what Kerwin describes as “taller, leaner buildings.” The third tower has not yet been unveiled.

The site includes three “outdoor living rooms” for public use, along with a dog run,” Weldon said.

“At the top of the park, you look down and see the pathway and all this green space,” he added. “There will be a coffee shop where you walk under the lower level.”

“The four-building concept was like a wall of buildings,” she said. “That works for some neighborhoods, but we really wanted to open up the space and create a place for the community to come together.”

A regard for open space inspired the design of the buildings’ common areas, which Kerwin arranged to include views of natural wonder and civic beauty. The amenities floor will contain an outdoor pool, a row of barbecue grills and a deck overlooking Lake Shore Drive and Lake Michigan. Inside, a fitness center and indoor pool will offer the same vista through a glass wall.

“We all understood immediately that you have to orient common space towards Lake Michigan,” he said. “The glass wall on the amenities floor is a cool thing, especially at night when there’s traffic on Lake Shore Drive. It’s like a river.”

One story above the amenities floor, the Cirrus lobby “overlooks Lake Shore Drive and brings your view right out to the water,” Kozloski said. Along with Kerwin and Weldon, she credits Magellan Development Group for bringing the project and the neighborhood to life.

“Lendlease partnered with Magellan on the last parcel at Lakeshore East, which we consider the crown jewel because it is the last site that they had,” she said. “There’s no other place in the city like this.

Weldon, who believes that the buildings “will be seen in any skyline shot from the lake towards the city,” called the project “a great final touch for Lakeshore East.”

The Magellan Development Group initiated New Eastside’s transformation by, among other things, transforming a forgotten old railroad yard into an award-winning green space.

“The land sat fallow for decades because nobody could make it come to life,” Kerwin said. “Now Lakeshore East Park is one of the most beautiful parks in the country.”

Nestled alongside a multilevel street grid that rises nearly fifty feet over the banks of the Chicago River, the New Eastside is home to the Vista Tower, the AON Center, and the Blu Aqua Hotel. It is bordered by the Riverwalk, the Cultural Mile, and Millennium Park. Yet many people still arrive there by accident.

“One of the big comments in community meetings and the city’s planning process was, everyone gets there and they want to know how to get to Navy Pier,” Kozloski said. She envisions a wayfinding system to help people find the lake and Navy Pier.

“We’re still working on that part of the design,” she continued. “There will be signage, and we can incorporate art to make it more pleasant from park to lake and lake to park.”